For a heart without love is a song with no words
And a tune to which no one is listening
So your heart must give love and you'll find that
You shine like rain on the leaves you'll be glistening.


Andy Partridge
I say I like your coat
Her thank-you tugs my heart afloat
I nearly didn't hear for
Seagulls screaming kiss her, kiss her


Andy Partridge
It's in the order of their hedgerows
It's in the way their curtains open and close
It's in the look they give you down their nose
All part of decency's jigsaw I suppose
Sunday church and they look fetching
Saturday night saw him retching over our fence
Bang the wall for me to turn down
I can see them with their stern frown
As they dispense the kind of look that says
they're Perfect.


Andy Partridge
Dear God, sorry to disturb you, but...
I feel that I should be heard loud and clear.
We all need a big reduction in amount of tears
And all the people that you made in your image,
See them fighting in the street
'Cause they can't make opinions meet about God,
I can't believe in you.


Andy Partridge
Will you tell them about that far off and mythical land
And how a child to the virgin came?
Will you tell them that the reason why we murdered
Everything upon the surface of the world
Is so we can stand right up and say we did it in his name?


Andy Partridge
Well I don't know how many pounds make up a ton,
Of all the nobel prizes that I've never won,
And I may be the mayor of simpleton,
But I know one thing,
And that's I love you.


Andy Partridge
The man who sailed around his soul
From East to West, from pole to pole
With ego as his drunken captain
Greed, the mutineer, had trapped all reason in the hold


Andy Partridge
Brain gets bent, heart gets broken
You can't jump off once the pages turn
School is out but never over
That's the only lesson you can learn


Andy Partridge
Now that I'm out and I'm shouting in doorways
Freed from a love more like murder
I should be singing but in liberation
Feel like a ship with no rudder.


Andy Partridge
We stole their babes and mothers, chiefs and braves
Although we held the whip, you knew we were
The real slaves
To alchemy, human alchemy.


Andy Partridge
I'd smile so much my face would crack in two
Then you could fix it with your kissing glue
I'd like that
Yes, I'd like that

Before you give up hope, turn back and read the attacks that were made on Lincoln.
Bruce Fairchild Barton 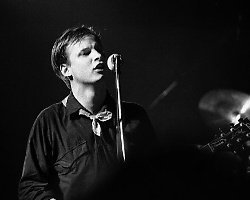 Creative Commons
Born: November 11, 1953 (age 67)
Bio: Andrew John "Andy" Partridge is an English singer, songwriter, and guitarist. He was a founding member, guitarist and chief songwriter of the pop/new wave band, XTC. He lives in Swindon, Wiltshire, where he was brought up.
Known for:
Most used words:
wonder, love, heart, hear, kiss, falls