My relations with Korchnoi depend on whether he has slept well. If he had bad dreams, he speaks a lot of rubbish.

Anatoly Karpov
If you want to become a World Champion you should avoid playing in Open tournaments.

Anatoly Karpov
People knew about 110 years of chess history. Nowadays, nobody is able to tell you the name of the world champion of 2000.

Anatoly Karpov
Even a dickhead would do a better job than Ilyumzhinov. The chaos in the chess world is caused by leaders who are unable to do their job properly.

Anatoly Karpov
Seville never had a rich chess tradition. Valencia is entirely different, it is enough to say that one of the city squares is named after me. 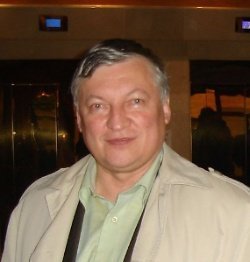 Creative Commons
Born: May 23, 1951 (age 70)
Bio: Anatoly Yevgenyevich Karpov, PhD is a Russian chess grandmaster and former World Champion. He was the official world champion from 1975 to 1985 when he was defeated by Garry Kasparov.
Known for: