What one commonly takes as 'the reality,' including the reality of one's own individual person, by no means signifies something fixed, but rather something that is ambiguous-that there is not only one, but that there are many realities, each comprising also a different consciousness of the ego.

Albert Hofmann
I know LSD; I don't need to take it anymore. Maybe when I die, like Aldous Huxley.

Albert Hofmann
LSD wanted to tell me something. … It gave me an inner joy, an open mindedness, a gratefulness, open eyes and an internal sensitivity for the miracles of creation.

Albert Hofmann
In studying the literature connected with my work, I became aware of the great universal significance of visionary experience. It plays a dominant role, not only in mysticism and the history of religion, but also in the creative process in art, literature, and science. More recent investigations have shown that many persons also have visionary experiences in daily life, though most of us fail to recognize their meaning and value. Mystical experiences, like those that marked my childhood, are apparently far from rare.

Albert Hofmann
I believe that if people would learn to use LSD's vision-inducing capability more wisely, under suitable conditions, in medical practice and in conjunction with meditation, then in the future this problem child could become a wonderchild.

Albert Hofmann
Outside is pure energy and colorless substance. All of the rest happens through the mechanism of our senses. Our eyes see just a small fraction of the light in the world. It is a trick to make a colored world, which does not exist outside of human beings.

Albert Hofmann
In a dreamlike state, with eyes closed (I found the daylight too unpleasantly glaring), I perceived an uninterrupted stream of fantastic pictures, extraordinary shapes with intense, kaleidoscopic play of colors,

Albert Hofmann
When you study natural science and the miracles of creation, if you don't turn into a mystic you are not a natural scientist.

Albert Hofmann
Deliberate provocation of mystical experience, particularly by LSD and related hallucinogens, in contrast to spontaneous visionary experiences, entails dangers that must not be underestimated. Practitioners must take into account the peculiar effects of these substances, namely their ability to influence our consciousness, the innermost essence of our being. The history of LSD to date amply demonstrates the catastrophic consequences that can ensue when its profound effect is misjudged and the substance is mistaken for a pleasure drug. Special internal and external advance preparations are required; with them, an LSD experiment can become a meaningful experience. Wrong and inappropriate use has caused LSD to become my problem child.

Albert Hofmann
I share the belief of many of my contemporaries that the spiritual crisis pervading all spheres of Western industrial society can be remedied only by a change in our world view. We shall have to shift from the materialistic, dualistic belief that people and their environment are separate, toward a new consciousness of an all-encompassing reality, which embraces the experiencing ego, a reality in which people feel their oneness with animate nature and all of creation.

Albert Hofmann
I was visited by Timothy Leary when he was living in Switzerland many years ago. He was a very intelligent man, and quite charming. I enjoyed our conversations very much. However, he also had a need for too much attention. He enjoyed being provocative, and that shifted the focus from what should have been the essential issue. It is unfortunate, but for many years these drugs became taboo. Hopefully, these same problems from the Sixties will not be repeated.

Albert Hofmann
The cultural-historical meaning of the Eleusinian Mysteries, their influence on European intellectual history, can scarcely be overestimated. Here suffering humankind found a cure for its rational, objective, cleft intellect, in a mystical totality experience, that let it believe in immortality, in an everlasting existence.
This belief had survived in early Christianity, although with other symbols. It is found as a promise, even in particular passages of the Gospels, most clearly in the Gospel according to John, as in Chapter 14:16-20.

Albert Hofmann
I think that in human evolution it has never been as necessary to have this substance LSD … It is just a tool to turn us into what we are supposed to be. 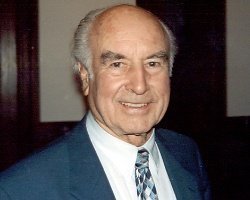 Creative Commons
Born: January 11, 1906
Died: April 29, 2008 (aged 102)
Bio: Albert Hofmann was a Swiss scientist known best for being the first person to synthesize, ingest, and learn of the psychedelic effects of lysergic acid diethylamide.
Known for: