"Now he took the music of like Mandrill, like "Fencewalk", certain disco records that had funky percussion breaks like The Incredible Bongo Band when they came out with "Apache" and he just kept that beat going. It might be that certain part of the record that everybody waits for—they just let their inner self go and get wild. The next thing you know the singer comes back in and you'd be mad." 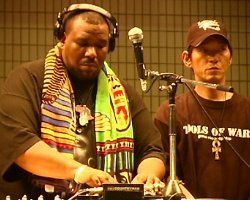 Creative Commons
Born: April 17, 1957 (age 64)
Bio: Kevin Donovan, better known by the stage name Afrika Bambaataa, is an American DJ from the South Bronx, New York. He is notable for releasing a series of genre-defining electro tracks in the 1980s that influenced the development of hip hop culture.
Known for: