Fanaticism and extremism cannot grow on an earth whose soil is embedded in the spirit of tolerance, moderation, and balance. Good governance can eliminate injustice, destitution and poverty.

Abdullah of Saudi Arabia
When the Head is Rotten, It Affects the Whole Body

Abdullah of Saudi Arabia
We state with a unified voice that religions through which Almighty God sought to bring happiness to mankind should not be turned into instruments to cause misery,

Abdullah of Saudi Arabia
Allah says [in the Koran]: "If they repent before you overcome them, you should know that Allah is forgiving and merciful."... we are opening the door of forgiveness[...] and acceptance of Islamic law, to all who have strayed and committed a crime in the name of religion... Everyone who belongs to this group that has wronged itself who has not yet been apprehended in terrorist operations – we offer them a chance to return to Allah... Anyone who accepts this and surrenders of his own free will... will be treated according to the law of Allah.

Abdullah of Saudi Arabia
In beloved Iraq, blood is flowing between brothers, in the shadow of an illegitimate foreign occupation, and abhorrent sectarianism threatens a civil war.

Abdullah of Saudi Arabia
We should not let the enemies interfere in the Islamic countries relations including Iran and Saudi Arabia. 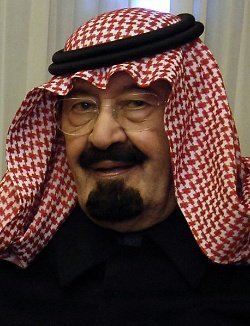